When looking back, music appears to always have been a way of expressing oneself and feeling connected with the people in one’s surroundings. Research does show that different cultures focused on their own specific instruments and ways to play these, and while this led to music being so very different depending on where in the world one was, it still had a common purpose – to unite people.
Because one’s choice of music decides one’s personality and identity, or? 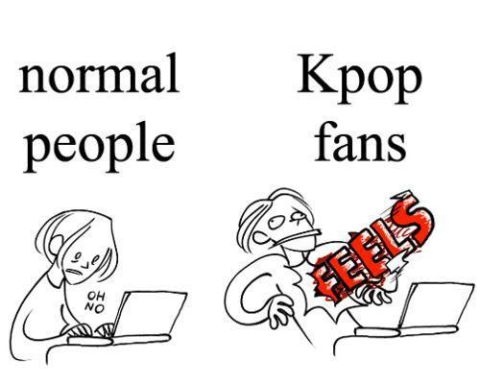 Anecdote time! I used to go to a considerably small school, one year only consisting of 20 people. These 20 people all pretty much listened to the same music – the hits that were being destroyed by the radio – and I am not at all saying that there is anything wrong with this, I mean, there is of course a reason to why these songs were played over and over again – but I was tired of these songs. I had heard all of them before. As a person who cannot go a day without listening to music (I think my ears might be permanently flattened as a cause of the excessive wearing of headphones..) I craved for something new.
So I went on a journey, trying to find myself in different music genres, adjusting my identity to fit with the music genre and its stereotypical fans. And one day in April 2014, I happened to accidently stumble onto a Korean music video on YouTube. I watched a few more. And too late I realized that I could never go back to my normal life. I was stuck in the KPOP world. Forever.

This newfound love for Korean music resulted in a great difference between the others and me. Even though the only real difference between what we were listening to was the language used, my identity suddenly differed from everyone else’s.

In today’s society, music is an important part of our daily life. Studies show that we in general listen to music several hours a day. We listen to music in school when we study, when we work out, when we’re going to bed – yeah, we listen to so much music that it becomes a part of ourselves. It is therefore not very surprising that music has a great impact on how we think and act and how we choose to express our identity.

Stereotypes
Despite trying to avoid it, we unconsciously create images of other people depending on what music they listen to based on stereotypes, and how fans of a certain genre usually act and think. Even though we are aware of that our images can be wrong and that we should not judge a person by their looks, it is very difficult to ignore the stereotypes and we often base other’s personalities on their choice of music. Does this mean that our identity that we have created from our choice of music really only based on stereotypes? How else are we supposed to know that we should listen to jazz or classical music if we see ourselves as intelligent and sophisticated, and rock or metal if we feel rebellious? And are these stereotypes true? Can we understand someone’s identity if we only know what music they listen to?

The science side says maybe.

According to research made by Cambridge University, the stereotypes are important in this discussion. Because of the stereotypes that exist, many people choose to listen to certain music because they want to be seen in a certain way. They know that people around them will see them as intelligent if they listen to classical music for example. Therefore one’s perceptions are often true. During the research, Cambridge interviewed people who all agreed upon the stereotypes for each music genre. This is a compiled list: 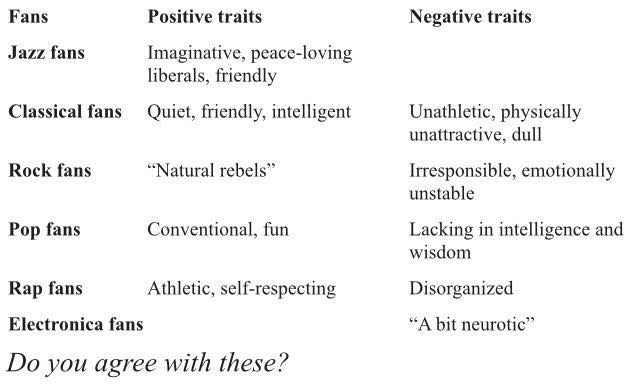 But despite this research, in my opinion, I do not believe that it is that simple anymore. In today’s society, most people do not limit themselves to one music genre, as we have access to for example Spotify and Youtube where we easily can “taste” other genres. I myself do not only listen to KPOP, in contrast to popular belief…

So, in conclusion, we cannot just look at a list of stereotypes and believe that we know a person fully, but we can often get a good foundation to build on.