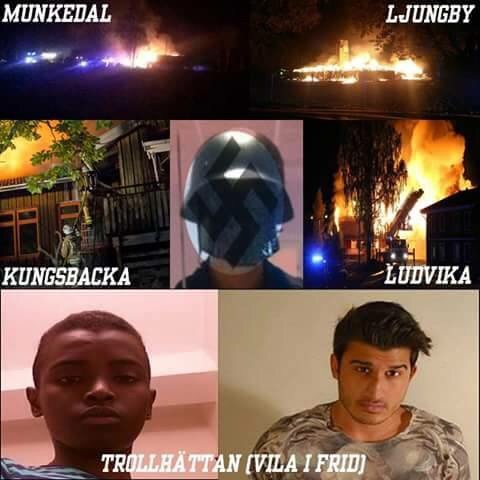 Terrorists. There isn’t a single day that goes by without me hearing about terrorism this and terrorism that in Sweden. I am sick of reading about people getting harassed simply due to their looks and the language they speak, apparently they “look and talk like terrorists”.

So what does a terrorist look like? Dark skin? Long beard? Middle-eastern? This may come as a shock, but terrorism has no face. Any sociopath with the IQ of 50 can get a hold of a firearm and kill someone in the name of whatever. Due to our ignorance we automatically assume that all terrorists are from the middle-east. That in turn creates an irrational fear of middle-eastern people.

Let me tell you about the REAL terrorists in Sweden. We have had several terror attacks during the past couple of months. These attacks were not committed by anyone with a foreign ethnicity. These attacks were not labeled as acts of terrorism. Several refugee shelters have been burnt to the ground and they “suspect” that it was arson. Like no shit Sherlock, I thought refugee shelters just spontaneously burnt to the ground for no apparent reason. These acts were most likely committed by neo-nazis or right-wing extremists.

How long will it take before we realize that we are all human. Nobody is born evil. An individual’s personality is heavily affected by society and the people around them. We have the power to change the world if we try and even the smallest gesture can make the largest impact.

The choice is yours.

2 thoughts on “Hate and Fear”