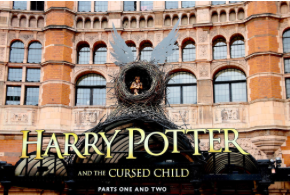 Even though the comeback of the much loved characters of the Harry Potter series certainly spread a lot of craze and excitement in the Potter community, not all fans are fully pleased by the new book co-written by JK Rowling, “Harry Potter and the Cursed Child”.

The new addition to the famous series is actually the theatre script for the Harry Potter play that started showing at the London Palace Theatre a few months ago.

While, to begin with, Rowling spread a “Keep Calm and Keep the Secret” policy all over social networks, now enough time has passed to allow us to spoiler a few parts of the book.

The story starts off exactly where we left off in Deathly Hallows: 19 years later on platform 9 ¾ , where the new generations of Potters, Weasleys and Malfoys are gathered, awaiting another year at Hogwarts or, in Albus Potter’s case, the first year at Hogwarts.

This year however, things are changing.

Albus Potter is sorted into Slytherin, and as he starts drifting further and further apart from his father, he finds that his only friend at Hogwarts is actually Draco Malfoy’s son, Scorpius.

Yet, the friends only lead themselves into more trouble: soon they are played straight into the hands of Voldemort’s daughter, who wants to save Cedric Diggory in order to fulfill a prophecy that might save her father.

Things still don’t seem to go according to plan as only more mess is created when Albus and Scorpius attempt to use time turners to go back to the Triwizard Tournament and save Cedric;

Soon enough, the witch’s true identity, kept secret up until this point, is revealed to the boys and Albus manages to reach out to his father in time and the day is saved once again with the  help of the famous Harry Potter.

But where does that leave us, exactly? However exciting it may be to have a new published story to bring you back into the wizarding world, there is also some confusion that leaves you wondering.

Voldemort’s daughter appears on the scene of the wizarding world, and coincidentally Harry’s scar starts hurting again after nineteen years.

Is it really necessary, after all this time, to once again bring up the imminent threat of the long deceased Dark Lord? Snape would most likely say Always , but maybe even for the great potion’s master this would be stretching it.

Of course the threat of evil always brings a certain excitement into the books, but this does appear to be a bit of an extreme for the situation.

Another interesting question that I am sure has puzzled many fans is this: If Voldemort is incapable of feeling and understanding love, would he really have had enough lust to give in to Bellatrix Lestrange?

In some ways, this concoction seems to be a product of speculations and rumours which have been circulating between dedicated Harry Potter fans.

Has Rowling simply responded to the cries of her fans or does she really believe there may have been hope for Lord Voldemort to get some action? Who knows.

But if we look past fandom world debates, why not give it a go?

It is most certainly an interesting read, and for all the Potter fans who are unable to attend the play, the official script is a pretty good place to start.

So, what are you waiting for? Time to set your own opinion straight and read it.